The story of how Logical Machines came to be goes back to 1994. Lee Minkler, owner of Logical Machines, had been an inventor of innovative machinery for many years. His “ski tuner” machine became a ski industry phenom back in 19XX solving the problem of how to sharpen and resurface skis in one pass. He then moved on to solving problems for small companies in the specialty food market.

He was approached by Francie Caccavo of Olivia’s Crouton in Charlotte, VT. She had been filling bags of her gourmet croutons by hand and needed to speed up her operations. At the time, the only option she had was to purchase a bagging machine built for high end food producers like Frito Lay. These machine cost quite a bit, and Lee was interested in seeing if he could work out a solution for small producers that would get the job done efficiently and cost effectively.

Lee got to work in the basement of his house. True to his farm-boy tinkering roots, his first prototype was built of cardboard, duct tape, and wood (see photo below and note the croutons being tested!) The filler/bagger that Lee finally completed for Francie was made of steel and incorporated a supply hopper, vibrating feed pan, spout,  foot switch, an off-the-shelf electric scale, and thermal sealing unit (see photo). Francie was able to increase her crouton production from 1000 bags per week to over 1300 bags a week. 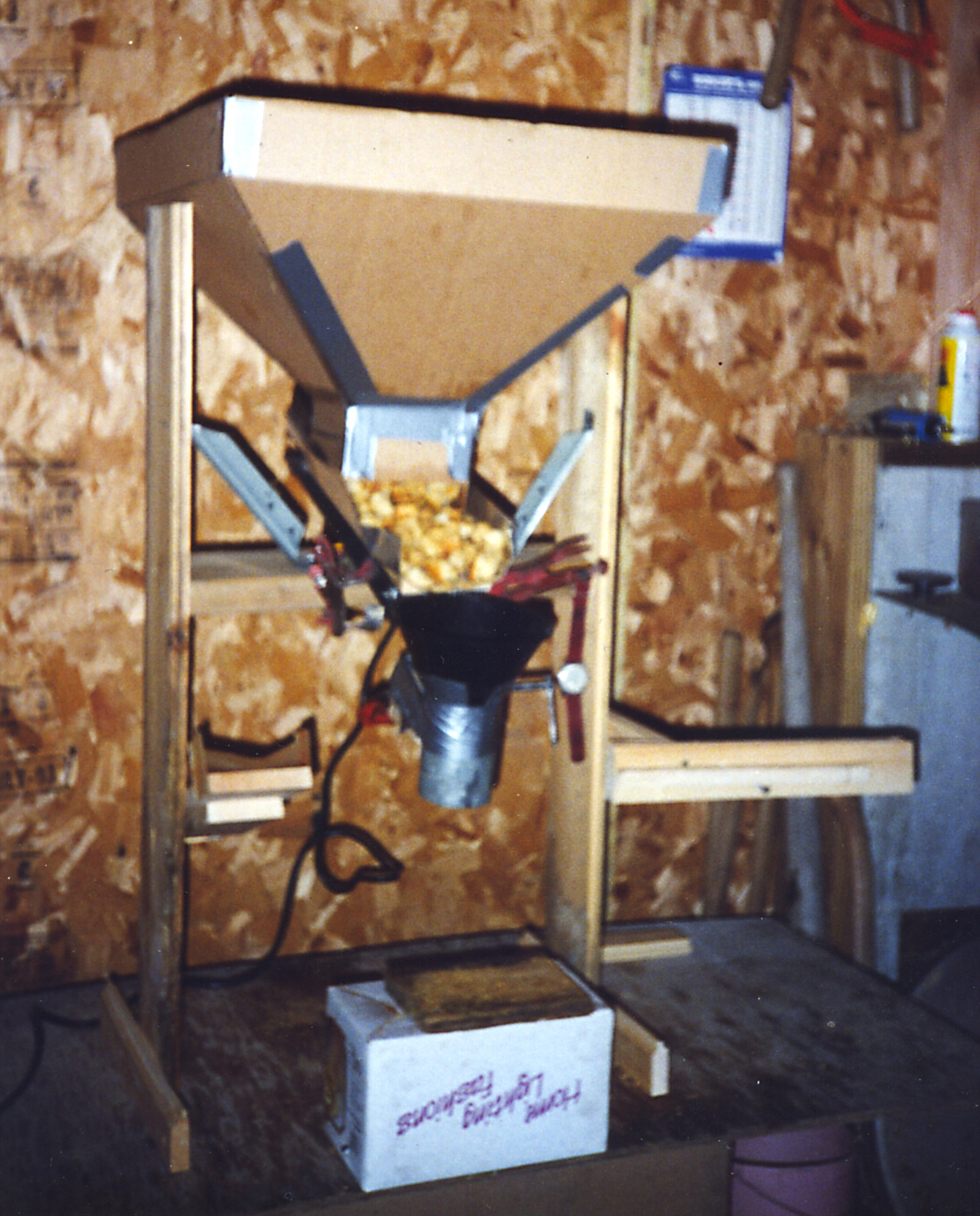 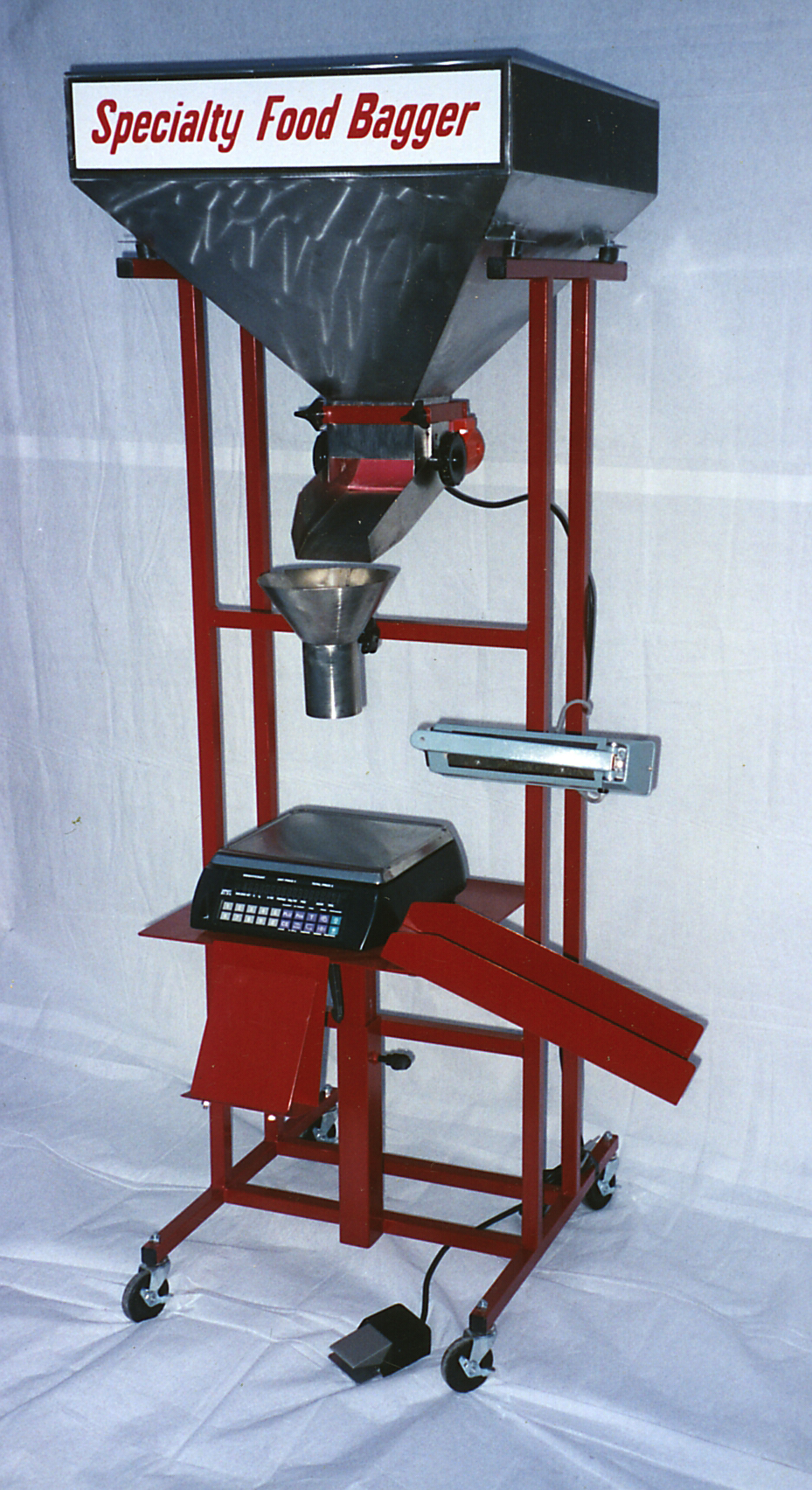 Soon, Lee set to work refining the design. The next step was to replace the off-the-shelf electric scale with system that, using an integrated scale table, could control the vibrating feed pan and shut it off once the desired weight was achieved. To do this, Lee reached out to local circuit designers and fabricators to create what would be the “grandfather” of the current Logical Controller II (see photo).

Further refining the design of the controller, Lee released the Logical Controller I in 2003. This controller, coupled with the tested design of the vibrating feed pan and scale table, would become the Model S-3—the first semi-automatic scale system for Logical Machines. The original S-3 closely resembles in form and function the current S-5 Bulk Scale System.

The original Logical Machines S-3 with the Logical Controller I

As Logical Machines grew, Lee was always responding to the needs of his small business customers. Many were looking for a scale system that could weigh out very accurate amounts of less than one ounce, and allow for high fill speeds. Lee set to work developing the S-4 Semi-Automatic Scale System. The hallmark of this system is the integrated Weigh Hopper that does away with the scale table altogether. At around the same time, Lee released the Logical Controller II further refining speed, accuracy, and efficiency.

Lee and the crew at Logical Machines continue to develop innovative responses to the needs of their customers. The S-6 Cascading Scale System and S-7 Dual Lane Scale System were both developed in direct response to customers who needed particular solutions to vexing fill problems. It will be interesting to see where the trail of experimentation and innovation leads in the years to come!

Posted in For Review